The last 3 nights we have stayed at the most gorgeous campsite called Bunyoni Overland Camp Resort. It is situated right on Lake Bunyoni and is nestled among lush green mountains and hills. It is utterly picturesque and if you ever decide to go to Uganda I highly recommend coming here.

It seems like every morning we have to get up before the crack of dawn while it’s still dark. Today was no exception. A bunch of us hired a van that would take us across the border and into Rwanda. I’ve had an obsession with this country ever since I watched the movie Hotel Rwanda about 15 years ago. Learning about the 1994 genocide and reading books from the survivors has given me so much appreciation for those who live through tragedy and adversity. Today we went to the capital city of Kigali so that we could experience first hand what the Rwandans went through during that time. Kigali is actually the cleanest city in all of Africa. Rwanda was the first to ban plastic bags and the city streets are pristine. Not only is the city clean, but it’s situated among stunning hill after hill. Rwanda is actually called the country of a thousand hills and this is for obvious reasons.

Crossing the border was rather interesting. It was a lot less chaotic than our crossing from Kenya into Uganda, but this time the hold up was the plastic bag situation. Everyone had to go through a bag check and if they found any plastic it was confiscated. I saw one lady get her loaf of bread pulled out of a plastic bag and then put into a paper bag so she could take it with her. Of course because I tend to get car sick I always have a spare bag on hand. I didn’t want them to take it away from me, so I sneakily slid it into my pocket and brought the contraband across the border.

The pristine streets of Kigali.

Once we arrived in Kigali our first stop was the Nyamata Genocide Memorial. Located on the outskirts of the city, this was a Catholic Church that became a death trap back in April 1994. Prior to 1994, whenever there was any unrest people would seek refuge in a church and know that they’d be safe. When the killings began this time around it was an obvious place for so many to go. Thousands crowded into the church that fateful day and when the government-run Interhamwe Militia came, it just made it easier to kill so many people at once. Throwing grenades, shooting guns and of course machetes were used and not a soul survived. The roof and walls are still littered with bullet holes and inside the church are rows upon rows of benches piled with blood stained clothes left from the victims. It was utterly haunting to walk in there knowing what had happened so few years ago. It absolutely blows my mind that humans can cause so much pain to each other. Down a flight of stairs in the church are hundreds of coffins where each one is filled to the brim with skulls and bones. Some are open so you can see just how full they are. We were told of stories of how certain people were killed and because it’s so disturbing I can’t even write about it. Outside the church were mass graves and a beautiful garden, and yet right beside this ominous place was a school where little kids yelled at us and waved with great big smiles on their faces. Such a stark contrast. When you see the concrete evidence of what was left in the wake of the killings it truly leaves you speechless. 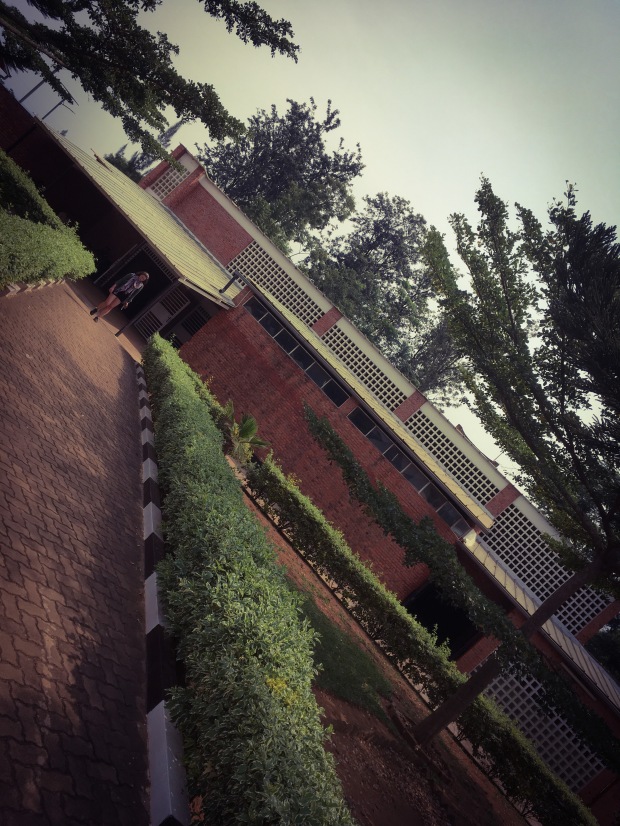 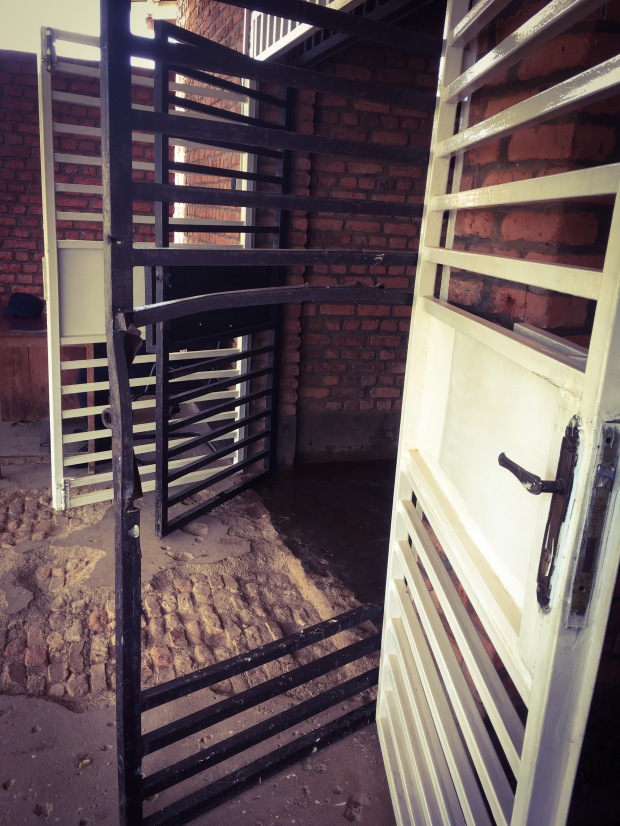 The black gated door is the original door that had a grenade thrown through. You can see the cement has been damaged as well from the shrapnel. 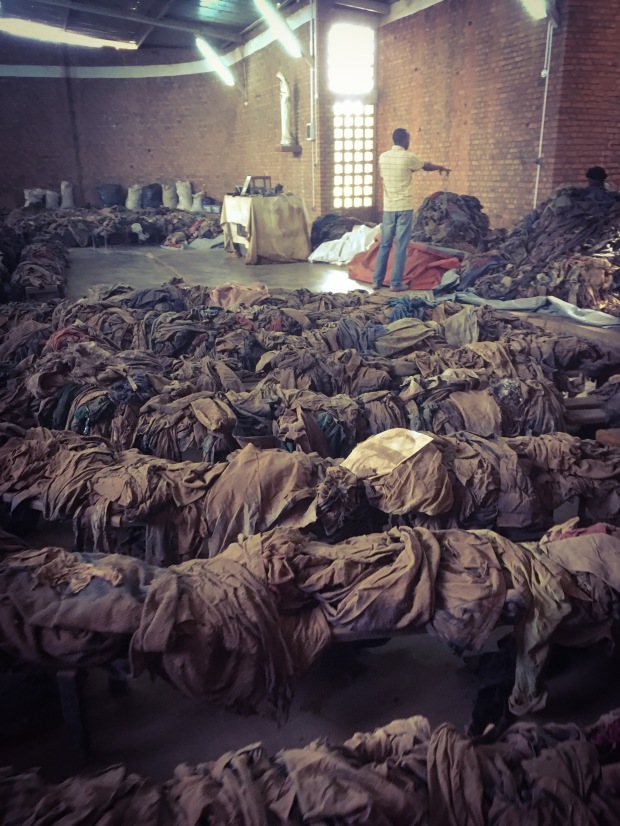 Inside the church, this was just a glimpse of the rows, upon rows of soiled clothes from the victims.

Some of the personal belongings (ID cards, jewelry, and money)  left behind that sits at the pulpit.

The next stop was the Kigali Memorial Centre. This was built and officially opened 10 years after the genocide. Here we listened to stories and watched videos from the survivors. It took us from the colonization to the present day showing us all the events that lead to that tragic year. The world turned a blind eye and this country was basically obliterated.  Not only did the world  do nothing to save these innocent people, but it’s sickening to learn that France gave the militia all the weapons and helped provide a route out of the country when the killings ended. There are  flowers on the graves with signs that say “Never again “, but what is happening in Burma right now is probably very similar! 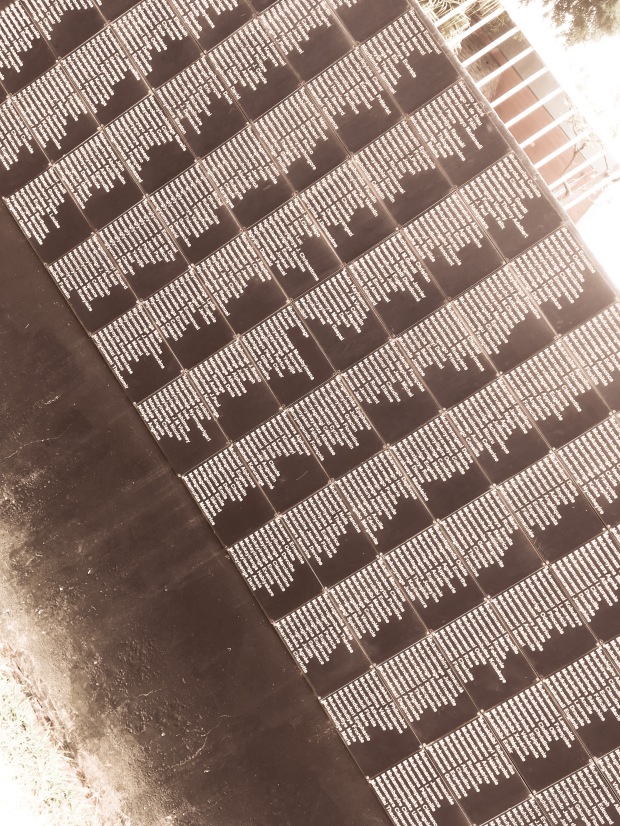 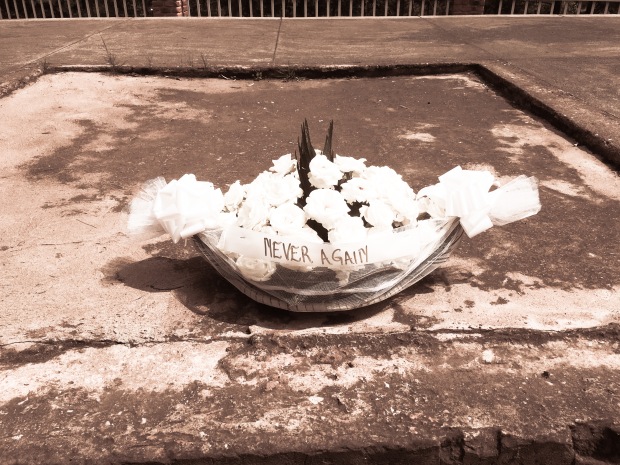 Lastly we stopped at the Hotel Milles Collines. This is the hotel that the movie Hotel Rwanda was based on. Here we walked through the gates, made our way to the terrace and had lunch in the very spot that so many came for safety. Although the hotel has clearly been renovated it still felt so twisted in some way to be there enjoying a nice meal. Back in 1994 the pool was drained until it was empty, as this was the only drinking water at the time. Now it is filled back up with guests swimming in it…just like nothing every happened. So bizarre.

Although it was an emotionally draining day I feel privileged to be able to come to Kigali and witness both the devastation and the rebuilding of this beautiful country. Rwandans have put their country back together peacefully and with pride. Just the fact that they have the cleanest city in all of Africa shows that they are working together as one to heal and move forward. 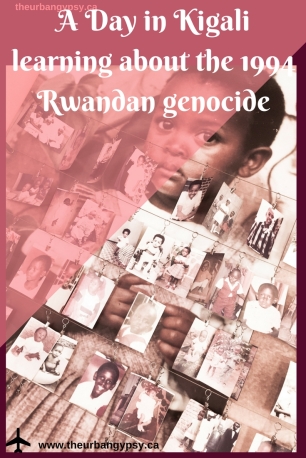 Although I wasn’t the one filming this amazing experience, this was the incredible whale shark that I got to snorkel with in Tofo, Mozambique just a few weeks ago. It was incredible to see it swim towards me with his giant mouth and then be right above him as he continued on. An absolute unreal experience that I will never forget. ❤️ #tofomozambique #mozambique #whaleshark #jezebelsforever
Our last days in Mozambique. One amazing country filled with so much beauty and so much laughter. #mozambique #ilovesfrica
The most untouched and beautiful place I’ve ever been. Absolutely stunning. With barely any tourism hit in Mozambique, this archipelago is pristine! #mozambique #vilankulo #paradise
Here are a few more shots from the last few days. Having a jolly good time in Mozambique ❤️ I don’t want this dream to end. #mozambique #iloveafrica #wanderlust
On the road in Mozambique and a few shots from paradise. #mozambique #iloveafrica #tofomozambique
Eswatini (which used to be called Swaziland) is picture perfect with lush mountainous landscapes. Riding a bicycle past zebra, warthogs and other amazing wildlife was absolutely surreal. Here’s a taste of Swaziland. And look at the cool beehive huts we stayed in! #eswatini #swaziland #iloveafrica
A few shots from Kragga Kamma Game Park the other day. #kraggakamma #gamedrive #southafrica
Today was super cool! About a half hour outside of Port Elizabeth is the Sacramento Trail. Walking along the shoreline towards the massive sand dunes was absolutely stunning! Such a beautiful part of this country! #southafrica #sanddunes #sacramentotrail
Today we took a boat cruise out to see the penguins. We were unbelievably lucky when we came across a few pods of dolphins. It was estimated to be around 150-200 dolphins swimming around our boat. They were definitely frisky as so many were busy copulating! #raggycharters #dolphins #penguins #southafrica
Another day at Missionvale Township. Today we made friendship bracelets with the kids. They loved it! Missionvale Care Centre has so many encouraging murals on all the walls. This last one confuses Kris and I!
Today Kris and I gave a lesson on dental hygiene. The toothbrushes were a big hit! And I can’t help but throw in a few more pics from Shamwari. #southafrica #lovethesechildren #shamwarigamereserve #iloveafrica
I apologize but I can’t help but post more pics from this past weekend at Shamwari. #shamwarigamereserve #southafrica #gamedrivesightings
I had one of the most incredible weekends of my life. A weekend at @shamwariprivategamereserve was absolutely magical. We were treated like queens and saw the most amazing wildlife. It truly was a dream! Thank you @janco.duplessis #shamwari #southafrica #safari #natureisamazing
Day 2 at Missionvale Care Centre. The first few pics are of an art project we did with the After School Care kids. Then there is a photo of Rachel (Mother Christmas)wrapping presents (notice she decorated it with the word ho), lastly these are the ladies in the kitchen and the food parcels that only some get each week. An amazing day at Missionvale.
My first full day working at Missionvale. The first photo is of Sister Ethel. She started this Community Centre and is truly the most amazing lady. She has met Mother Theresa and the Queen of England for her respected hard work. It was truly an honor to meet her today.
South Africa ❤️ Puppies❤️
On a day like today I am very grateful that I’m heading to Africa on Friday! #brrrr #thisisedmonton
I’ve been working hard on making new Malas to replace the Christmas rush. Here are a few new pieces that will be up for sale. #malanecklace #edmontonmade #yegmade #bycurated #themakerskeep #whollyhandmade #theurbangypsy #theurbanwanderer
This is Edmonton and what -34 looks like! And this is supposed to last a whole week! 🤦‍♀️ #edmontonfreeze #extremecold #whydoilivehere
And here is the last piece that I made over the holidays. Still needs to be covered in resin but when it’s done it will be for sale #mixedmedia #yegartist #edmontonartist #bycurated #themakerskeep #whollyhandmade #theurbangypsy #theurbanwanderer
%d bloggers like this: